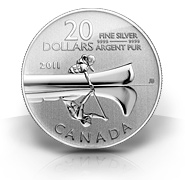 The Royal Canadian Mint has issued the next release in its $20 face value coin for $20 program - the $20 Pure Silver Canoe Commemorative Coin.

This Silver Canoe Coin marks a continuation to the program which has shown a history of selling out. In fact, the last release of the series sold out in only twenty-nine days of availability.

That strike featured a Maple Leaf design and had a maximum mintage of 200,000. Acknowledging the extreme interest in the series, the Royal Canadian Mint (RCM) announced an increase mintage of 250,000 for the newest strike of the series.

The newest release also features a new reverse design emblematic of another iconic symbol of Canada - the canoe. The simple, yet elegant, design shows a canoe gliding through the water. A young boy inside the canoe is depicted reaching down into the water to break the glass-like surface of the lake with his hand.

A reflection of the scene is also shown in the coin, however, it depicts a more historic view of a similar scene. The canoe now takes the shape of a traditional birch-bark canoe and the person inside is an early native paddler (or voyageur).

The obverse contains the Susanna Blunt effigy of Her Majesty Queen Elizabeth II of England. Obverse inscriptions include "DG REGINA" and "ELIZABETH II."

The Royal Canadian Mint is selling the 99.99% pure silver coin for only CAD $20 despite it actually having a face value of $20. This basically means an even exchange of $20 cash for the $20 coin (plus shipping charges).

Each strike has a weight of 7.96 grams with a diameter of 27mm. The coins contain approximately 1/4 ounce of silver giving them a melt value approximately equal to that amount of silver on the open market. Thus, if silver is currently trading for $30, the coins would have a melt value of about $7.50.

While quite a bit smaller than other silver strikes from the Mint like the recent 2012 Cougar Bullion Coin, this Canoe Coin would nonetheless make a nice addition to anyone's collection as well as make a great gift.