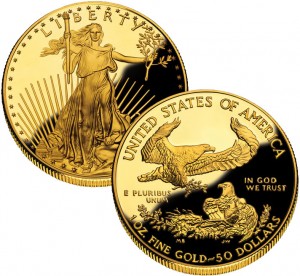 2010 Proof American Gold Eagle sales continue to be strong according to the most recent figures available from the US Mint.

Initially released on October 7, 2010, the coins proved quite popular in their first few days of availability. That interest has waned some, but buyers are still snatching up the strikes at a steady pace.

The figures shown below are for approximately the first week and a half of the coins sales with an as-of date of Sunday, October 17, 2010.

The biggest news in the information above is the fact that the individual One Ounce Proof Gold Eagles are now getting quite close to a sell-out. Standing at 76.8% of their total allotted product limit, the coins may only be available for a few more days before the Mint declares them no longer available.

The strikes are still being sold on the Mint's website as of this writing, but a disclaimer note indicates that current purchases will not be shipped until November 8, 2010 indicating that their built-up inventory of the coins has been depleted and additional strikes are being produced to meet the demand.

Even if the individual ounce Eagles do sell out, the coins will still be available in the 4-Coin Set which includes the ounce coin along with the 1/2 ounce, the 1/4 ounce and the 1/10 ounce. Obviously, the price of the set has been keeping some collectors from purchasing it as less than 10,000 have been accounted for as of the figures available.

In fact, gold prices had been teetering at a level that would have dictated an increase for the first several days in which the coins were available. However, the precious metal has seen some declines as of late meaning the price will probably not be adjusted up this week either.