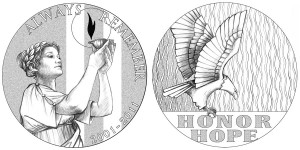 Shown on the obverse of the proof quality medal is an image of Lady Liberty holding the Lamp of Remembrance to signify the loss of life and innocence that occurred on September 11, 2011. Behind Liberty are two beacons of light indicating the "resiliency and triumph of those who persevered" (according to the US Mint). Surrounding the image are the inscriptions of ALWAYS REMEMBER and 2001-2011.

The reverse contains the image of an eagle meant to symbolize the strength of the survivors, the families of the victims and the nation as  a whole. The eagle is depicted in front cascading water chosen to emblematic of several things including peace, serenity, healing and the continuity of life. Under the eagle is the inscriptions of HONOR and HOPE.

Congress authorized these 2011 September 11 National Medals with the passage of Public Law 111-221. According to that law, a $10 surcharge will be collected on the sale of each medal with the proceeds benefiting the construction and operation of the National September 11 Memorial & Museum at the World Trade Center in New York.

These silver medals will be struck at both the United States Mint's facility in West Point and its facility in Philadelphia using the same blanks used for the American Silver Eagles. The reverse of the medals will contain the appropriate 'W' or 'P' mintmark indicating which facility produced them.

According to the Mint, the strikes will initially sell for the introductory price of $56.95 plus the Mint's standard shipping and handling beginning at Noon (Eastern) on June 20, 2011. The introductory price will end at 5:00 p.m. ET on August 18, 2011 and go up to $66.95 if the mintage cap of 2 million medals has not been accounted for by that time.

Shipped separately from the medal, but at no additional charge, will be an 8"x10" document showcasing the design of the medals along with a description. According to the Mint, this document will be suitable for framing.

Once available, those wishing to order the medals may do so directly from the Mint. No household order limits will be in place on the strikes with the buyer able to choose if they would like their medals from the US Mint's West Point or Philadelphia facility.