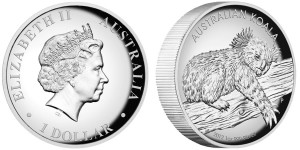 The Perth Mint of Australia has released a new coin that is sure to be extremely popular with collectors.  Available now, the 2012 Australian Koala Silver Proof High Relief Coin is struck from one ounce of 99.9% pure silver and features the image of a koala on the reverse.

That reverse image is struck on a concave surface which allows for the design of the koala to be struck in high relief adding an additional level of detail to the intricate design. The obverse is also featured on a concave surface and bears the portrait of Queen Elizabeth II.

The image of the adult koala sleeping on the branch of a tree used on this coin first appeared on the Perth Mint's 2012 Australian Koala Silver Bullion Coins. These bullion pieces made their debut in November of 2011 and were announced the previous September.

Since then, several other koala coins have also been struck by the Perth bearing the same reverse image. For instance, in May the Perth Mint released the  5 ounce and  gilded 1 ounce Silver Koala coins. All featured the sleeping koala design by Perth Mint artist Aleysha Howarth.

The reverse design on this high relief coin also bears the inscriptions of AUSTRALIAN KOALA and 2012 1 oz  999 SILVER. The Perth Mint's historic 'P' mintmark may be seen to the right of the design.

As previously mentioned, the obverse contains a portrait of Queen Elizabeth II as completed by Ian Rank-Broadley. The portrait is surrounded by the inscriptions of ELIZABETH II, AUSTRALIA and the legal tender face value of 1 DOLLAR.

These coins are struck as legal tender under the Australian Currency Act of 1965. However, the face value is relatively minor compared to the melt value of a one ounce silver coin. However, despite both associated values, most collectors obtain these koala coins purely for numismatic reasons.

The Perth Mint indicates the maximum mintage of the high relief coin is just 10,000. Each ships in a display case along with a numbered certificate of authenticity in an illustrated shipper.

Specifications on the new coin are shown below: