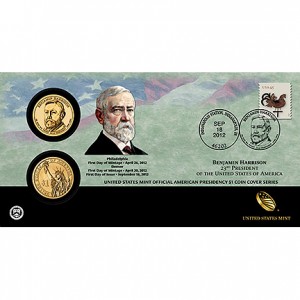 Both coins are affixed to a display card which includes a colored portrait of President Harrison. He was the 23rd President of the United States and served in office from March 4, 1889 through March 4, 1893.

The coin cover also features a postmark dated September 18, 2012 from Indianapolis, IN. The city hosts the Benjamin Harrison Presidential Site.

Mintage of the new coin cover is limited to just 22,000. This is the same mintage level used by the Mint for the other 2012 dated Presidential $1 Coin Covers.

Pricing of the Benjamin Harrison $1 Coin Cover is $19.95, plus the US Mint's standard shipping and handling of $4.95 per order. When released, orders for the cover may be placed directly from the US Mint by calling 1-800-USA-MINT (872-6468). Orders are also accepted via the US Mint's website of www.usmint.gov.