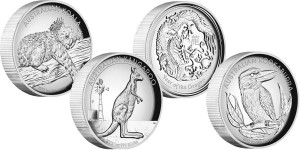 The Perth Mint of Australia has released the 2012 High Relief Silver Proof Four-Coin Collection. As if the coins of the collection were not desirable enough for many collectors, the fact that the Perth Mint has chosen to release the set with such a limited mintage will undoubtedly enhance that desirability.

Included as part of the four-coin set are high relief examples of the Kangaroo, Koala, Kookaburra, and Lunar Series II Year of the Dragon Coins. All four of these coins were issued individually earlier in the year, but the release of this set marks the first time the coins have appeared together in a four-coin collection.

Each of the coins is struck from one ounce of 99.9% pure silver. The mintage of the four-coin set has been set by the Perth Mint at just 1,000 sets.

The reverse of the Kangaroo Silver Coin shows an image of an adult kangaroo set against a typical Australian bush scene. This includes a windmill and water tank off in the distance. Reverse inscriptions include "AUSTRALIAN KANGAROO" and "2012 1 OZ 999 SILVER."

Shown on the reverse of the Koala Silver Coin is a sleeping koala with its front limb dangling from the branch of a tree. "AUSTRALIAN KOALA" is inscribed above the design with "2012 1 OZ 999 SILVER" below.

For the reverse of the Kookaburra Silver Coin, the image of a kookaburra bird is shown perched on the branch of a tree. Inscriptions include "AUSTRALIAN KOOKABURRA" and "2012 1 OZ 999 SILVER".

Finally, on the reverse of the Year of the Dragon Silver Coin, an image of a mythical dragon is offered along with a symbolic 'pearl of wisdom' and the Chinese character for 'dragon." Reverse inscriptions include "Year of the Dragon."

The four coin set comes with a display case and an illustrated shipper. A numbered certificate of authenticity is also included.

The 2012 High Relief Silver Proof Four-Coin Collection may be ordered directly from the Perth Mint, while the extremely limited mintage of just 1,000 remains. Pricing of the set is currently set at AUS $ 400.00, but is subject to change.

To order the set or for more information, please follow the Perth Mint affiliate link provided below to be taken to the Perth Mint's Recent Releases page: