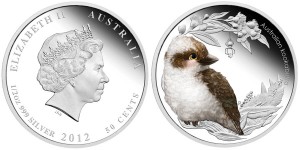 The new series builds on the popularity seen for the original Australian Bush Babies series which made its debut in 2010. Five strikes were issued as part of the original series each featuring a different bush baby on the reverse including a kangaroo, a sugar glider, a dingo, a bilby and a koala.

Under the second associated series, five new animals will be featured on the reverse including the just released kookaburra. The four remaining animals to be featured include the possum, the platypus, the echidna and the wombat.

Like all coins of both series, the Kookaburra Coin is struck from one half ounce of 99.9% pure silver. The strike features a legal tender face value of AUS $.50 and is issued under the authority granted in the Australian Currency Act of 1965.

Shown on the reverse of the coin is a design by Elise Martinson. It features a colorized baby kookaburra perched in the branch of a tree. Dangling behind the bird is a spider with representations of Australian bush flowers also shown. Reverse inscriptions include "AUSTRALIAN KOOKABURRA" along with the Perth Mint's historic 'P' mintmark.

Kookaburras are native to Australia and New Guinea and are large members of the kingfisher species. They are probably best known around the world for their call which resembles loud human laughter.

The reverse of the coin contains Ian Rank-Broadley's effigy of Queen Elizabeth II. Surrounding the portrait of the Queen are the inscriptions of "ELIZABETH II," "AUSTRALIA," "2012," "50 CENTS" and "1/2 oz. 999 SILVER."

Each coin is struck to a diameter of 36.6 mm with a maximum thickness of 2.30 mm and a minimum gross weight of 15.591 grams. The Perth Mint places each coin in a display case and includes a numbered certificate of authenticity inside an illustrated shipper which contains an image recreating the kookaburra seen on the coin.

Pricing of the strike is listed at AUS $61.36, although that can change based on recent activity in the silver market. Orders for the 2012 Kookaburra 1/2 oz Silver Proof Coin may be placed directly from the Perth Mint through the following affiliate link: