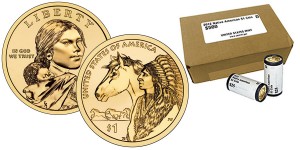 The United States Mint today, April 26, 2012, will be releasing collectible rolls and boxes of the 2012 Native American $1 Coin. The six products (two different roll options and four different box options) will be available for ordering beginning at Noon (Eastern).

Collectors should be familiar with the 25 coin roll product as they have appeared in years past from the US Mint. However, the 250-coin and 500-coin boxes are a new production option from the United States Mint.

All of these releases contain circulation quality strikes of the 2012 Native American $1 Coin. The obverse of the strike shows a portrait of Sacagawea with the reverse continuing a series of themed designs which started in 2009. Additional details as described by the US Mint include:

"The theme for the 2012 Native American $1 Coin is "Trade Routes in the 17th Century."  The coin's reverse (tails side) features a Native American and horse in profile, with horses running in the background, representing the historical spread of the horse.  The design includes the required inscriptions UNITED STATES OF AMERICA and $1."

"The coin's obverse (heads side) design remains the familiar "Sacagawea" design by sculptor Glenna Goodacre, introduced in 2000.  Inscriptions are LIBERTY and IN GOD WE TRUST.  Like the Presidential $1 Coins, the Native American $1 Coins are minted in the distinctive golden color with edge-lettering of the year, mint mark and E PLURIBUS UNUM."

Each 25-coin roll is sold for $32.95, plus the Mint's standard shipping and handling charge of $4.95 per order. The rolls are wrapped in special paper indicating the year of mintage, the minting facility that struck them, the dollar value of the contents and the United States Mint logo.

Also offered as a new option from the US Mint is the 2012 Native American 500-Coin Box. These boxes contain 500 circulation quality Native American $1 Coins from either the Philadelphia facility or the Denver facility, buyer's choice.