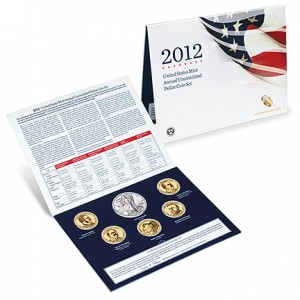 Yesterday, September 6, 2012, the US Mint issued the 2012 United States Mint Annual Uncirculated Dollar Coin Set. The release of this set marks a return for this product after a three year absence.

Included as part of the set are uncirculated examples of the dollar coins issued by the US Mint during the year. A total of six coins are offered in the set with one being struck from one ounce of .999 fine silver.

As the list above indicates, four of the coins included as part of the newly released set are offered under the Presidential $1 Coin Program. Strikes of the series feature unique reverse designs showcasing portraits of the former Presidents of the United States. Of interest, these 2012 coins mark the first of the series (which dates back to 2007) to not also be issued into general circulation as that policy was abandoned under order of the Treasury of the Secretary.

The 2012 Native American $1 Coin is also offered in the new set. This coin is struck with an obverse portrait of Sacagawea and a reverse emblematic of the theme of "Trade Routes in the 17th Century."

Finally, the set also includes on American Eagle Silver Uncirculated Coin. This is the strikes which is composed of one ounce of .999 fine silver.

The 2012 United States Mint Annual Uncirculated Dollar Coin Set may be purchased directly from the US Mint for $54.95, plus $4.95 shipping and handling per order.