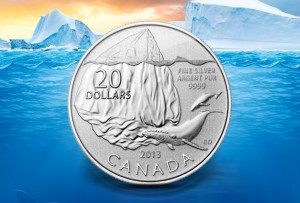 Appearing as the next release of an extremely popular series is the 2013 $20 Iceberg Fine Silver Coins. These strikes are offered as the ninth issue of the Royal Canadian Mint's exchange $20 for $20 series in which the coins are sold to the public at their legal tender face value of $20.

Shown on the reverse of the strike is a design by Canadian artist Emily Damstra.

"Witness the awesome beauty of a majestic iceberg, slowly melting into the sunset over the warming summer months," offers the Royal Canadian Mint. "Feared by mariners for centuries, this place, where the cold Labrador Current merges with the warm Gulf Stream, is known to many as "Iceberg Alley."

On the obverse, Susanna Blunt's effigy of Queen Elizabeth II appears. Inscriptions around the portrait are ELIZABETH II and D G REGINA.

This coin is the ninth in the Mint's Exchange $20 for $20 series. Previous releases in the program include:

All previous release of the program have sold out.

As stated, mintage of the newest strike is limited to only 225,000. This is 25,000 less than issued for previous coins of the program.

For more information, or to place an order visit the Royal Canadian Mint's online store at http://www.mint.ca/store/.