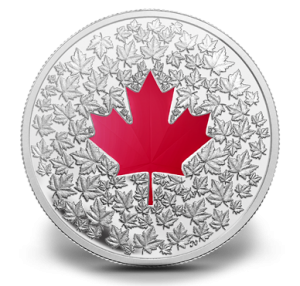 This Maple Leaf Impression Coin is struck from 31.39 grams of 99.99% pure silver. Shown on the reverse of the coin is a maple leaf image featuring over 100 leaves arranged in  a design as to create a large maple leaf impression in the center.

If this coin looks familiar to some, it may. A similar 2013 Maple Leaf Impression Silver Coin was released in June featuring the same basic imagery. However, that coin was much smaller and did not feature the translucent coloring in the center.

The maple leaf has long been considered an iconic image of Canada. It has been featured as a symbol of the country on many different items including currency and the national flag.

"Royal Canadian Mint engraver José Osio's work highlights the beauty and variety of the iconic maple leaf," offers the RCM as a description of the design on the coin's product page. "The finely engraved reverse features the sunken central impression of a maple leaf filled with beautiful translucent red enamel, allowing light to reflect off the facets inside. The central image is set amongst more than 100 smaller maple leaves."

These coins are struck as legal tender of Canada. Shown on the obverse is the Susanna Blunt effigy of Queen Elizabeth II. The portrait is surrounded by the inscriptions of ELIZABETH II, CANADA, 2013, D G REGINA and the face value of 20 DOLLARS.

Mintage of the coin is limited to 10,000. Each features a diameter of 38mm with the aforementioned composition of 31.39 grams of .9999 fine silver.