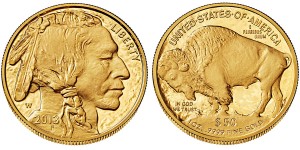 Each is struck from one ounce of .9999 fine, 24-karat gold. No household order limits or mintage limits are in place on the release.

The 2013 Proof Gold Buffalo continues a series of strikes dating back to 2006. That year saw the US Mint release both bullion and proof quality versions of the coin which have featured well known obverse and reverse designs since their debut.

These designs are based on the work of James Earle Fraser. They were first seen on the 1913 circulating nickel nicknamed the "Indian Head Nickel" or the "Buffalo Nickel."

As can be inferred from those nicknames, the designs include the images of the profile of a Native American on one side and an American Bison on the other. The obverse contains the Native American portrait which is surrounded by the inscriptions of LIBERTY, 2013, the initial "F" for Fraser, and the West Point "W" mint mark.

On the reverse, the image of an American Bison (sometimes referred to as buffalo) can be seen. Reverse inscriptions include UNITED STATES OF AMERICA, E PLURIBUS UNUM, IN GOD WE TRUST, $50, 1OZ., and .9999 FINE GOLD. 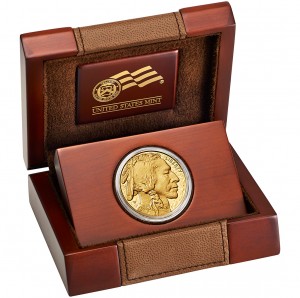 "Each American Buffalo Gold Proof Coin is presented in an elegant hardwood box with a matte finish," indicates the United States Mint. "The coin is exhibited on a platform that can be positioned at an angle for display when the box is open.  A Certificate of Authenticity is included."

Pricing of the coin is subject to change weekly based on the bureau's pricing policy for precious metal numismatic products.