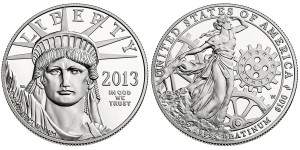 Available beginning today, July 18, 2013, at Noon (Eastern), the United States Mint will make available the 2013 American Eagle Platinum Proof Coin. The 2013 Platinum Eagle is initially available for $1,800.00 but that pricing is subject to change based on platinum market conditions.

The 2013 Platinum Eagle  is offered as the fifth issue in the US Mint's American Eagle Platinum Proof Coin Program "Preamble Series."

The six concepts and their feature years are shown below:

As shown, the series is scheduled to include one more release.

Shown on the reverse of the newest release is the design emblematic of the "To Promote the General Welfare" theme by Joel Iskowitz. It features an image of Young America in front of  interlocking gears. The design is said to symbolize "the interconnection of power between the states and the national government."  Inscriptions include UNITED STATES OF AMERICA, 1 oz., .9995 PLATINUM and $100 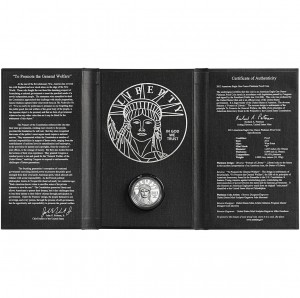 The obverse contains an image of Lady Liberty as designed by John Mercanti. Included inscriptions are LIBERTY, E PLURIBUS UNUM, IN GOD WE TRUST and 2013.

Those interested in purchasing a 2013 American Eagle Platinum Proof Coin may do so directly from the United States Mint via its website of www.usmint.gov or by calling 1-800-USA-MINT (872-6468). As previously mentioned, current pricing of each coin is $1,800.00.