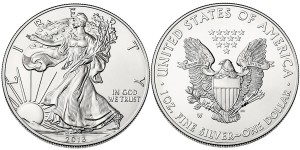 Available now for purchase from the United States Mint is the 2013 American Eagle Silver Uncirculated Coin. The 2013 Uncirculated Silver Eagle went on sale beginning at Noon (Eastern) on Tuesday, May 28, 2013.

Like all other Silver Eagle coins, this uncirculated version is composed of one ounce of 99.9% pure silver. Pricing of the strike is listed at $48.95, plus the US Mint's standard shipping and handling charge of $4.95 per order.

"American Eagle Silver Uncirculated Coins contain one ounce of .999 fine silver and are struck on specially burnished blanks," states a description on the US Mint's product page. "This coin offers silver precious metal purchasers an additional collectible version of the popular American Eagle Silver Bullion Coin and features a finish similar to its bullion coin counterpart. Each coin also bears the “W” mint mark reflecting its striking at the United States Mint facility at West Point."

As stated in that description, the Uncirculated Silver Eagle is offered by the US Mint as a collectible version of its bullion Silver Eagle. A related 2013 Proof Silver Eagle was issued earlier in the year on January 24, 2013.

Shown on the obverse of all Silver Eagles is a depiction of Liberty. The design features "Adolph A. Weinman's iconic design of an ever-hopeful Liberty striding confidently toward the sunrise, draped in the strength of the Stars and Stripes, and carrying branches of laurel and oak in her arms to symbolize both civil and military glory," according to the US Mint. Obverse inscriptions include LIBERTY, IN GOD WE TRUST and 2013. 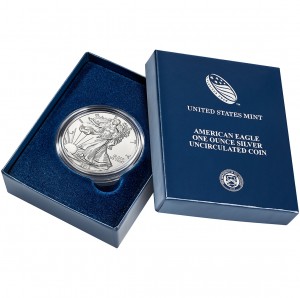 The reverse offers a design by United States Mint Sculptor-Engraver John Mercanti which depicts a heraldic eagle with shield. Reverse inscriptions include UNITED STATES OF AMERICA, 1 OZ FINE SILVER and ONE DOLLAR. E PLURIBUS UNUM may be found on a scroll in the eagle's beak.

Each coin comes encapsulated and presented in a US Mint display case. A certificate of authenticity is also included.