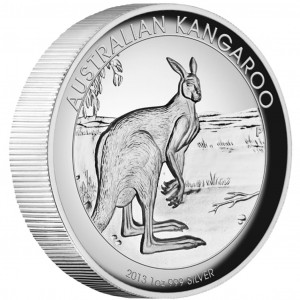 The Perth Mint of Australia has released the fourth annual issue of one of its most popular series. Available now from the Perth Mint is the 2013 Australian Kangaroo 1 oz Silver Proof High Relief Coin.

As indicated by the name, the coin contains a high relief image of a kangaroo on its reverse. Each is struck from one ounce of 99.9% pure silver.

The reverse of the 2013 strike shows a single adult kangaroo in an outback desert scene, struck to high relief. The reverse design is the work of Perth Mint artist Tom Vaughan. Inscriptions include AUSTRALIAN KANGAROO, 2013 1 oz 999 SILVER and the Perth Mint's historic 'P' mintmark.

Specifications of the one troy ounce of silver coin include a minimum gross weight of 31.135 grams. Maximum diameter is 32.60 mm with a maximum thickness of 6.00 mm. 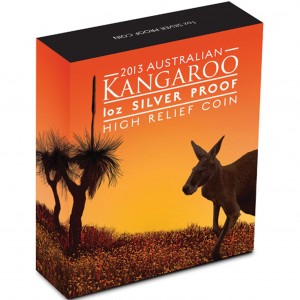 Each coin is housed in a Perth Mint display case and ships in an illustrated shipper along with a numbered certificate of authenticity.

For more information, or to purchase a 2013 Australian Kangaroo 1 oz Silver Proof High Relief Coin, please see the affiliate link below. Current pricing is shown as AUS $ 87.27 (US$ 80.06), but is subject to change.