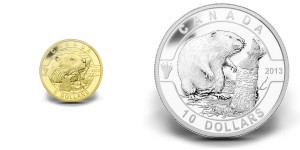 The Royal Canadian Mint indicates that two of its recently released numismatic products are fast approaching a sell-out. It is likely that both the 2013 Beaver 1/10 oz Fine Gold Coin and the 2013 Beaver 1/2 oz Fine Silver Coin will be sold out in short order.

Both strikes contain reverse designs emblematic of one of Canada's natural creatures, the beaver. Both are also offered as part of their respective O Canada gold and silver coin series. 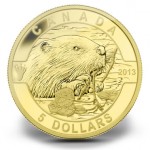 A beaver is pictured on the reverse of the 2013 Beaver Gold Coin with a design described by the Royal Canadian Mint with:

"Your coin was designed by Canadian artist Pierre Leduc and features a detailed portrait of a beaver. Viewed in profile from its right side, the beaver's face fills the central field. The animal's distinctive small ears, eyes, and nose—all adapted for underwater living—rise above the water in which the beaver is partially immersed. The animal's mat of thick, well-groomed fur and whiskers are rendered in fine detail. Its clawed forepaws limberly clutch a small branch from a tree, which the beaver eagerly chews for sustenance."

According to the RCM, 85% of the mintage has already been sold. The mintage cap for the release was set at just 4,000. Current pricing of the release is listed at CAD $279.95. 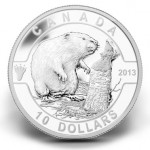 Like its gold counterpart, the 2013 Beaver Silver Coin offers a reverse design of a beaver. Mint officials describe the design with:

"Your coin was designed by Canadian artist Pierre Leduc and features a portrait of a beaver felling a birch tree. The beaver, viewed from the front with its head turned toward the right side of the coin, rises from the hard work of chopping at the birch trunk with its prominent incisors."

Inscriptions found on the reverse include CANADA, 2013, 10 DOLLARS and the stylized beaver paw print symbol.