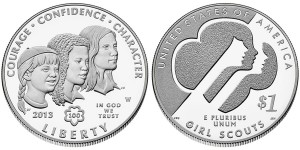 Today, February 28, 2013, the United States Mint will release the 2013 Girl Scouts of the USA Centennial Silver Dollar. The commemorative coins will be available beginning at Noon (Eastern) in both proof and uncirculated conditions.

This introductory pricing is scheduled to end on March 29, 2013, at 5 p.m. ET. After the introductory period, the price of each commemorative coin will increase by $5 bringing the proof silver dollar to $59.95 and the uncirculated to $55.95.

Both coins are struck by the US Mint "in commemoration of the centennial of the establishment of the Girl Scouts of the United States of America," according to the legislation which authorized them (Public Law 111-86). The Girl Scouts was established on March 12, 1912, by Juliette Gordon Low in Savannah, Georgia.

Shown on the obverse of each coin is a design by United States Mint Artistic Infusion Program (AIP) Master Designer Barbara Fox. It depicts the diversity of the organization by showing three different girls. Sculpting of the obverse was completed by United States Mint Sculptor-Engraver Phebe Hemphill. Obverse inscriptions include COURAGE, CONFIDENCE, CHARACTER, 2013, LIBERTY and IN GOD WE TRUST.

The reverse depicts the iconic Trefoil/profiles symbol of the Girl Scouts of the USA. It was designed by AIP Associate Designer Chris Costello with sculpting completed by United States Mint Sculptor-Engraver Joseph Menna. Reverse inscriptions include UNITED STATES OF AMERICA, E PLURIBUS UNUM, $1 and GIRL SCOUTS.

Each Girl Scouts of the USA Centennial Silver Dollar ships in a US Mint presentation case with a certificate of authenticity. Maximum mintage of the release is 350,000 across all product options.