The US Mint released the set for sale to the public on Tuesday, June 25, 2013 at Noon (Eastern). Pricing of the set is $9.95, plus the US Mint's standard domestic shipping and handling charge of $4.95 per order.

Found in the set are the following three coins:

All three coins of the set feature the same basic obverse and reverse imagery including an obverse portrait of George Washington by John Flanagan. 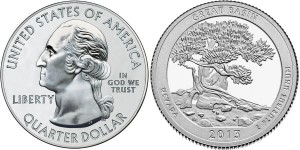 The reverse design showcases a design emblematic of the Great Basin National Park located in the state of Nevada.

"The reverse design depicts the beauty and unique qualities of a single Bristlecone Pine tree and the rocky glacial moraines where the trees grow," describes the US Mint about the design. "These trees grow at higher elevation in the park and are some of the world's oldest.  The park contains numerous Bristlecone Pine groves with trees older than 4,000 years.  Inscriptions are GREAT BASIN, NEVADA, 2013, and E PLURIBUS UNUM.  The reverse was designed by United States Mint Artistic Infusion Program Associate Designer Ronald D. Sanders and executed by United States Mint Sculptor-Engraver Renata Gordon."

These Great Basin Quarters are issued as the third of five 2013-dated releases of the US Mint's America the Beautiful Quarters® Program. Appearing this year before the Great Basin Quarter were coins honoring White Mountain National Forest of New Hampshire and Perry's Victory and International Peace Memorial of Ohio. Two strikes scheduled to appear later this year in the America the Beautiful Quarters series will honor Fort McHenry National Monument and Historic Shrine of Maryland and Mount Rushmore National Memorial of South Dakota.

The three coins of the set are mounted on a durable plastic card. On the front of the card, a photographic image of the national park may be found. The reverse contains information about the park as well as the quarters struck to honor it.

As mentioned, the Great Basin National Park Three-Coin Set is available for $9.95 directly from the United States Mint. Orders may be placed online at www.usmint.gov, or by calling 1-800-USA-MINT (872-6468).