This program honors the former Presidents of the United States in the order in which they served. Coins of the series are released at a rate of four per year with the program expected to be continued until all eligible individuals have been honored.

Originally, this series was struck for circulation with the coins released for general commerce through the Federal Reserve Bank system. That procedure ended in late 2011, however, when Treasury Secretary Geithner ordered a halt because of millions of dollar coins already being stored in Federal Reserve vaults.

Now, the US Mint only strikes the coins of the series for numismatic purposes. Typically, upon release, the Mint makes bags and rolls of circulation quality Presidential $1 Coins available. The coins are also struck and included as part of special annual sets and coin and medal sets featuring a Presidential dollar and the related First Spouse medal issued under the First Spouse Program.

Shown on the reverse of all of the Presidential $1 Coins is the same image of the Statue of Liberty. This image was originally designed by Don Everhart and is surrounded by the inscriptions of $1 and UNITED STATES OF AMERICA.

An edge inscription can be seen on each new Presidential Coin indicating the minting facility with a mintmark, the year and E PLURIBUS UNUM. In 2007 and 2008, the words IN GOD WE TRUST were also on the edge, however, that inscription was moved to the obverse in 2009. 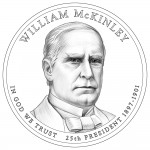 A portrait of the 25th US President, William McKinley, is shown on the obverse of the William McKinley Presidential $1 Coin. The portrait was designed and executed by United States Mint Sculptor-Engraver Phebe Hemphill.

Obverse inscriptions on the design include WILLIAM MCKINLEY, IN GOD WE TRUST, 25th PRESIDENT and 1897 – 1901. A release date of February 19, 2013 is scheduled for the coin. 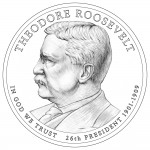 Inscriptions surrounding the portrait include THEODORE ROOSEVLET, IN GOD WE TRUST, 26th PRESIDENT and 1901 – 1909. A launch date of sometime in April 2013 is planned for the strike. 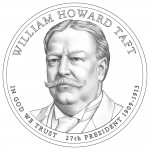 Obverse inscriptions include WILLIAM HOWARD TAFT, IN GOD WE TRUST, 27th PRESIDENT and 1909 – 1913. The coin is scheduled to appear sometime in July of 2013. 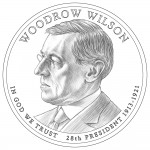 Surrounding the portrait of Wilson are the inscriptions of WOODROW WILSON, IN GOD WE TRUST, 28th PRESIDENT and 1913 – 1921. The coin is scheduled to be released in October of 2013.