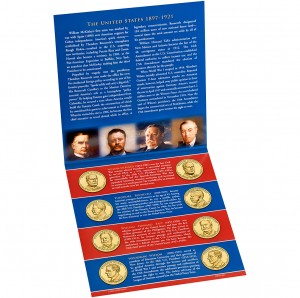 Those interested in ordering one of the new releases may do so directly from the United States Mint. They are offered for $16.95, plus the US Mint's standard shipping and handling charge of $4.95 per order.

The US Mint describes its uncirculated coins with:

"Uncirculated coins are manufactured using the same process as circulating coins, but with quality enhancements such as slightly higher coining force, early strikes from dies, special cleaning after stamping, and special packaging.  Uncirculated coins may vary to some degree because of blemishes, toning, or slight imperfections."

The set is created by the US Mint with a special presentation folder that includes brief biographical sketches and portraits of each President. Coins of the set are individually mounted in rotatable blisters allowing full views of each strike.

The Presidential $1 Coin program debuted in 2007 and features obverse portraits of the former Presidents of the United States. Shown on the reverse of the coins is the same depiction of the Statue of Liberty.

These coins are issued at a rate of four per year in the order in which the individuals served. The program is scheduled to continue until all eligible individuals have been honored.

Those interested in purchasing one of the 2013 Presidential $1 Coin Uncirculated Sets may do so directly from the US Mint. Orders are available by using the Mint's website of www.usmint.gov or by calling 1-800-USA-MINT (872-6468).  Hearing- and speech-impaired customers may order by calling 1-888-321-MINT (6468).