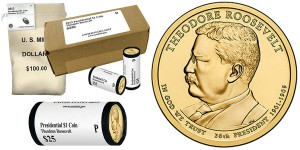 The Presidential $1 Coin program debuted in 2007 and features four new strikes released annually as part of it. Coins of the series contain obverse portraits honoring the former Presidents of the United States. They are released in the order in which the individuals served in office.

Theodore Roosevelt was the 26th US President, thus the coin honoring him appears as the 26th of the series. It showcases a portrait of Roosevelt surrounded by the inscriptions of THEODORE ROOSEVELT, IN GOD WE TRUST, 26TH PRESIDENT and 1901-1909 (the years in which he was President).

A short biography of Roosevelt provided by the US Mint states:

"Theodore Roosevelt was born in New York City in 1858.  He was lieutenant colonel of the Rough Riders Regiment during the Spanish-American War and was elected governor of New York in 1898.  He became President upon the death of William McKinley in 1901 and served nearly two terms.  While President, Roosevelt took an active interest in the design of American coinage, personally commissioning renowned sculptor Augustus Saint-Gaudens to redesign the “double eagle” ($20) gold coin and the $10 Indian head gold eagle.  He left office in 1909 but ran again in 1912 on the Progressive (“bull moose”) Party."

All reverses of the Presidential $1 coins contain the same likeness of the Statue of Liberty. Obverse inscriptions include UNITED STATES OF AMERICA and the legal tender face value of $1. Edge-incused inscriptions of the year, E PLURIBUS UNUM and the mint mark are also found on each coin.

New product options to be available from the US Mint featuring the Theodore Roosevelt Coin include:

Standard US Mint shipping and handling charges of $4.95 per order applies. In addition, the US Mint also charges an additional fee of $7.95 per 500-coin box ordered to cover additional shipping costs.

As previously mentioned, this coin appears as the second of the year in the series. Rolls, bags and boxes of the William McKinley Presidential $1 Coin were released in February.

Orders for the rolls, bags or boxes of the Roosevelt $1 Coins may be placed directly with the US Mint. Orders are accepted via the Mint's online website of www.usmint.gov or by calling 1-800-USA-MINT (872-6468). Hearing- and speech-impaired customers with TTY equipment may order by calling 1-888-321-MINT (6468).

One thought on “2013 Theodore Roosevelt Presidential $1 Coin In Rolls, Bags and Boxes”