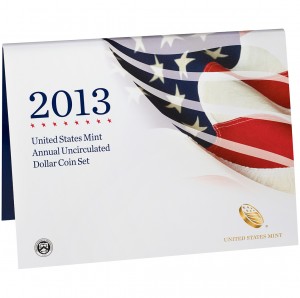 Pricing of the set is listed as $44.95, plus the US Mint's standard shipping and handling charge of $4.95 per order. No mintage, household, or product limit has been established with customer demand determining final mintage.

Found within the 2013 Annual Uncirculated Dollar Coin Set are six strikes representing the dollar coins produced by the US Mint during the year. These six coins include:

The six coins of the set are attached to an attractive display folder which includes the specifications of the included strikes.

When released, the 2013 United States Mint Annual Uncirculated Dollar Coin Set may be purchased directly from the US Mint for the aforementioned $44.95. Orders are accepted via the US Mint's website of www.usmint.gov or by calling 1-800-USA-MINT (872-6468).