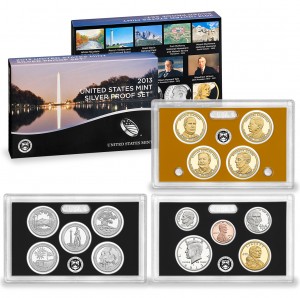 Today, May 2, 2013, at 12 noon (ET), the United States Mint will release one of its most popular annual numismatic products - the 2013 United States Mint Silver Proof Set®. The set is scheduled to be sold for $67.95, plus the US Mint's standard shipping and handling charge of $4.95 per order.

Fourteen different coins are included as part of the set with each struck to proof quality at the US Mint's facility in San Francisco. Of the fourteen, seven feature 90% silver compositions.

This gives the 2013 Silver Proof Set a total silver weight of 1.34 ounces. Silver coins include the Kennedy Half-Dollar, the five 2013 America the Beautiful Quarters and the Roosevelt Dime.

The fourteen coins of the set are:

Ten of the coins feature unique designs for 2013. Only the half-dollar, dime, nickel and penny showcase both obverse and reverse imagery already issued on a coin in a previous year.

Coins of the set are separated into three different protective lenses. The four 2013 Presidential $1 Coins come in one lens, the five 2013 America the Beautiful Quarters come in a second lens and the remaining six coins come in the third. All three are presented in an illustrated outer carton.

Orders for the 2013 United States Mint Silver Proof Set may be placed directly with the US Mint via its website of www.usmint.gov. Orders are also accepted by phone at 1-800-USA-MINT (872-6468).