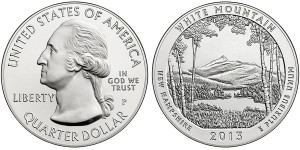 Buyers looking to purchase a 2013 White Mountain Silver Uncirculated Coin from the United States Mint are now out of luck. The US Mint indicates that the strikes are sold out.

Sales of the White Mountain Silver Uncirculated Coins began back on May 16, 2013. At that release, a maximum mintage of 25,000 was announced.

According to the most recent sales figures, a total of 20,691 have been sold. While the number is likely to change some, it appears the US Mint pulled the coins from availability before the maximum mintage was attained.

This is not uncommon for the series or other US Mint programs. It is a bit surprising, however, since sales of the White Mountain Coin attained the highest levels seen for the series since the 2011 releases. A large part of the renewed interest is likely attributed to the depressed silver market which resulted in the cost of these coins being lowered from previous price points.

At release, the US Mint was charging $179.95 for each White Mountain Coin. The price was lowered to $154.95 later in the year as the silver market fell. It was still at that same price point when the US Mint declared a sell-out.

Shown on the reverse of each coin is a design emblematic of White Mountain National Forest of New Hampshire.  The design of the associated quarter dollar (which is basically identical) was described by the US Mint with:

"The reverse design depicts Mt. Chocorua, the easternmost peak of the Sandwich Range, framed by birch trees.  It is an iconic view of the White Mountain National Forest system lands.  Inscriptions are WHITE MOUNTAIN, NEW HAMPSHIRE, 2013, and E PLURIBUS UNUM.  The reverse was designed and executed by United States Mint Sculptor-Engraver Phebe Hemphill."

All America the Beautiful related coins contain the same basic obverse portrait of George Washington. The portrait was originally completed by John Flanagan and first appeared on the 1932 circulating quarter dollar.

With this sell-out, only three America the Beautiful Five Ounce Silver Uncirculated Coins™ are still available for purchase. They include:

One other strike remains to be released in the program yet this year. The Mount Rushmore Silver Uncirculated Coin is scheduled to debut on November 7, 2013.