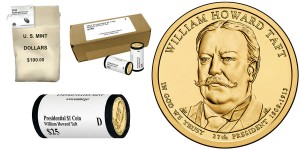 Beginning at Noon (Eastern) tomorrow, July 9, 2013, collectors will be able to order products containing the 27th release of the Presidential $1 Coin Program. The 2013 William Howard Taft Presidential $1 Coin will be available directly from the United States Mint in rolls, bags and boxes.

The new products will contain circulation quality $1 coins struck at either the US Mint's facility in Philadelphia or its facility in Denver. These coins are new strikes and have never actually been released into circulation.

Coins of the Presidential $1 Coin Program debuted in 2007 and features four new releases annually. The program honors the former Presidents of the United States in the order in which the individuals served if office.

As the twenty-seventh release, this coin honors William Howard Taft, the 27th President. A short biography of the President from the US Mint reads as follows:

"William Howard Taft was born in Cincinnati, Ohio in 1857. He was appointed as a federal circuit judge at the age of 34, served as civil administrator in the Philippines under President McKinley, and later as President Roosevelt’s Secretary of War. He won the Presidency in 1908, serving one term from 1909 to 1913. Taft’s post-presidency years consisted of serving as a professor of law at Yale University and as chief justice of the U.S. Supreme Court, a position he held until 1930, just prior to his death."

Newly available products and their price points are shown below:

Shown on the obverse of the coins is a portrait of William Howard Taft by United States Mint Artistic Infusion Program Associate Designer Barbara Fox with sculpting by United States Mint Sculptor-Engraver Michael Gaudioso.  Inscriptions include WILLIAM HOWARD TAFT, IN GOD WE TRUST, 27th PRESIDENT, and 1909 - 1913.

The reverse of all Presidential 1 Coins contains United States Mint Sculptor-Engraver Don Everhart's likeness of the Statue of Liberty. Inscriptions include UNITED STATES OF AMERICA and $1.  2013, E PLURIBUS UNUM, and the mint of origin are incused on the edge.

A shipping and handling charge of $4.95 is applied to all domestic orders. Due to their weight, and additional $7.95 is charged per 500-coin box ordered.