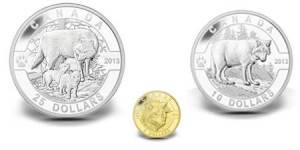 These three strikes are each available in extremely limited mintages while supplies last. Orders may be placed directly with the Royal Canadian Mint.

"Celebrate the power and mystique of one of Canada's most fascinating native species, the wolf," describes a Royal Canadian Mint statement. "Choose from three different Wolf designs, which are part of three new O Canada coin series, featuring iconic images of Canada which unite all Canadians through national pride and love for our home."

The Royal Canadian Mint has featured the wolf on many other coins throughout its history. Most recently, a $20 for $20 Wolf Silver Coin was introduced.

Shown on the reverse of the three new coins are different images of the carnivorous creature. All three designs are the work of artist Pierre Leduc.

On the reverse of the gold coin, a head shot of a single wolf is offered with a lake and forest in the background. "CANADA," "2013," "5 DOLLARS" and a stylized wolf paw-print are inscribed around the design.

The one ounce silver wolf coin shows a full-body likeness of a wolf mother and her two pups. They are standing amidst a forest scene. Inscriptions include “CANADA,”  “2013,” “25 DOLLARS” and the  stylized wolf paw-print.

For the reverse of the 1/2 ounce silver wolf coin, a single adult wolf is depicted. The background of this design offers the Canadian arctic landscape. Inscribed around the image are "CANADA," "2013," "10 DOLLARS," and a wolf paw-print.

Specifications of the strikes are as follows: