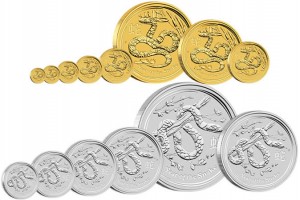 The Perth Mint of Australia has released the newest annual installments of its popular Lunar Series II program. The 2013 Year of the Snake Gold and Silver Bullion Coins are available now for order.

All of the new releases contain the new 2013 reverse designs created by the Perth for inclusion on the new coins. The gold bullion issues offer the image of a snake coiled among grasses and bamboo shoots. Reverse inscriptions include "Year of the Snake" and the Chinese character for snake.

The silver coins also show the image of a snake on the reverse, but for these precious metal coins the reptile is depicting hanging from a tree branch. This reverse also includes the inscription of "Year of the Snake" as well as the Chinese character for snake.

The coins are struck as legal tender of Australia. As official bullion coins of the Perth, they also carry the Australian government's guarantee of weight and purity.

These coins are issued as the continuation of the Perth's Lunar Series II program which last year featured the 2012 Year of the Dragon Coins. Under the program, new coins are released annually with reverse designs depicting one of the twelve characters found in the Chinese zodiac.

The newest releases offer the image of a snake as 2013 is considered the Year of the Snake. Those born during the year are said to be intelligent, graceful, independent and charming.

Mintages on most of the new coins is listed as unlimited by the Perth Mint. The only exceptions are offered below:

Those interested in obtaining the new bullion coins may do so directly from the Perth Mint bullion site of www.perthmintbullion.com. The new coins should also be available from coin and precious metal dealers worldwide.