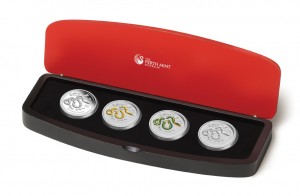 Currently available from the Perth Mint of Australia is a four-coin set containing strikes of the Australian Lunar Series II program. The 2013 Year of the Snake Silver Coin Typeset Collection contains four different Year of the Snake coins each struck from one ounce of 99.9% pure silver.

The four coins include a proof quality coin, a gilded coin, a colored coin and a bullion coin. All four are presented together in the collection which also includes one display case with the collection featuring a maximum mintage of just 1,500.

All four coins also contain the same basic obverse and reverse imagery. This includes an obverse portrait of Queen Elizabeth II. The portrait of the Queen is surrounded by the inscriptions of ELIZABETH II, AUSTRALIA, 2013, 1 DOLLAR and 1 OZ 999 SILVER.

As indicated by those inscriptions, these coins are struck as legal tender of Australia under the Australian Currency Act of 1965. In addition to the legal tender status of all coins, the weight and purity of the bullion coin is guaranteed by the Australian government.

Shown on the reverse of the coin is the official 2013 snake design chosen for use on all of the Perth Mint's silver Year of the Snake coins for the year. This image shows the snake curled around the branch of a tree. Shown to the right is the Chinese character for snake with YEAR OF THE SNAKE inscribed below.

The proof quality coin features a mirror-like polished table which differs from the gilded, colored and bullion coins which have a frosted table. The gold on the Year of the Snake Gilded Silver Coin is 24-karat with the colored coin showing the creature in its natural colors.

The four-coin typeset collection is available now directly from the Perth Mint for AUS $331.82 while the limited mintage of just 1,500 remains. Pricing is subject to change based on recent market conditions.

Each four-coin set includes a single display case which houses all four coins. An illustrated shipper and numbered certificate of authenticity is also included with each purchase.

More information on the 2013 Year of the Snake Silver Coin Typeset Collection is available directly from the Perth Mint via the affiliate link below: