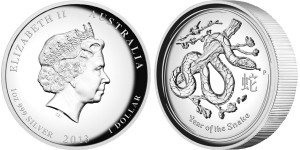 Available now from the Perth Mint of Australia is the 2013 Year of the Snake Silver Proof High Relief Coin. This release is struck from one ounce of 99.9% pure silver and features concave surfaces on both the obverse and reverse resulting in optimum flow of the precious metal when struck by the die.

Shown on the reverse of the coin is the image of a snake. This design actually first appeared on the 2013 Year of the Snake Bullion Coins which made their debut from the Perth Mint last month.

This newest release is one of many different numismatic versions of the related bullion coins to be offered by the Perth as part of its Lunar Series II collection. The Lunar Series II made its debut in 2008 and features annually changing reverse designs showcasing the twelve different creatures of the Chinese zodiac.

2013 is considered the year of the snake and thus these newest releases depict the reptile. Those born in 2013 are said to likely possess the qualities of intelligence, charm and grace.

The image of the snake on the reverse is shown curled around the branch of a tree. Below the snake, the inscription of "Year of the Snake" can be found while to the right is the Perth Mint's historic 'P' mintmark.

Struck as legal tender of Australia under the Australian Currency Act of 1965, the obverse of each coin contains Ian Rank-Broadley's effigy of Queen Elizabeth II. Surrounding the portrait are the inscriptions of "ELIZABETH II," "AUSTRALIA," "2013," "1 DOLLAR" and "1 oz 999 SILVER."

Each of these coins is struck from one ounce of .999 fine silver with a maximum diameter of 32.60 mm and a maximum thickness of 6.00 mm. Minimum gross weight of each piece is 31.135 grams.

These coins may be purchased directly from the Perth Mint via the affiliate link below: