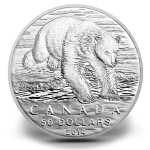 The Royal Canadian Mint debuts a new series of coins with the recent release of the 2014 $50 Polar Bear Silver Coin. This issue marks the debut strike of a new 'Exchange $50 for $50' silver coin program.

Each new release is composed of 15.87 grams of 99.99% pure silver. Shown on the reverse is the likeness of a single polar bear shown in its natural habitat.

The design, by Canadian artist Emily Damstra, offers the bear in what appears to be an ice flow as it moves from a floating chunk to land. Inscriptions on the design include CANADA, 50 DOLLARS and 2014.

As mentioned, the release is the inaugural strike of a new 'Exchange $50 for $50' series. Under the terms of the program, each $50 legal tender face value coin may be purchased for $50.

Both previous programs have proven popular with collectors leading to sell-outs of all but the most recent two $20 program issues.  For reference, those two $20 coins in the associated programs include the $20 Canada Goose Silver Coin and the $20 Bobcat Silver Coin.