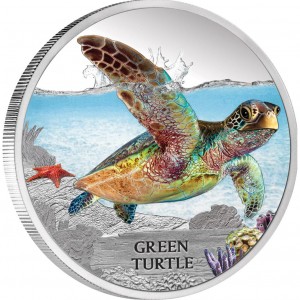 The Perth Mint of Australia has unveiled the 2014 Green Turtle 1 oz Silver Proof Coin. This strike marks the fourth release of the Perth Mint's Endangered and Extinct series.

Each is composed of one ounce of 99.9% pure silver. Maximum mintage of the Green Turtle Coin is just 5,000.

Offered on the reverse of the coin is a colorful design depicting a Green Turtle. The reptile is shown swimming in the water with the seabed and a distant horizon visible in the background. Inscribed near the bottom of the reverse is GREEN TURTLE.

"The green turtle is a large, weighty sea turtle that inhabits tropical and subtropical coastal waters all around the world," describes a statement on the coin's product page of the Perth Mint's website. "The green turtle is one of seven species of marine turtles around the world and has been present in the ocean for over 100 million years. Green turtles can often be found swimming in the warm water close to the surface and have also been known to take to land to bask in the sunshine, making them one of the few marine turtles known to leave water other than at nesting times."

The obverse of each coin contains Ian Rank-Broadley's effigy of Queen Elizabeth II. Surrounding the obverse portrait are the inscriptions of QUEEN ELIZABETH II, TUVALU, 1 DOLLAR, 2014 and 1 OZ 999 SILVER.

As indicated by those obverse inscriptions, these coins are struck as legal tender of the island nation of Tuvalu.

Previous strikes of the series include:

Of those three previous releases, only the Tasmanian Devil coin is still available. The first two of the series sold-out.

Specifications of the new Green Turtle Silver Coin are the same as previous program issues. This includes a composition of one ounce of .999 fine silver, a diameter of 40.60 mm and a thickness of 4.00 mm.

For more information, or to purchase a 2014 Green Turtle 1 oz Silver Proof Coin, please follow the affiliate link below: