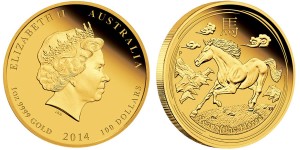 Each of the coins is struck from either one ounce, 1/4 ounce or 1/10 ounce of 99.99% pure gold to proof quality. These strikes are issued as part of the Perth Mint's extremely popular Australian Lunar Series II program.

Coins of the Lunar Series feature reverse designs emblematic of one of the twelve creatures found in the Chinese zodiac. As 2014 is said to be the "Year of the Horse," the creature showcased on the reverse is obviously a horse. Related Year of the Horse bullion coins were unveiled earlier this year.

Perth Mint artist Tom Vaughan designed the image used on all three of the proof gold coins. It shows a horse galloping in a stylized mountain and cloud scene.

Specifications of the new coin releases are as follows:

As indicated by the above chart, these coins are struck in extremely limited mintages. 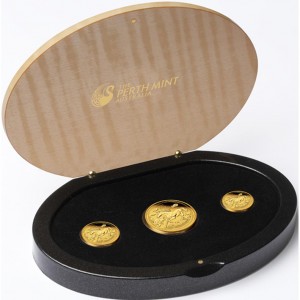 Each coin is housed in a Perth Mint timber-effect lid display case. The three-coin set features all three coins together in a similar case. A numbered certificate of authenticity and an illustrated shipper is also included.

For more information or to purchase a 2014 Year of the Horse Gold Proof Coin, please follow the affiliate link below: