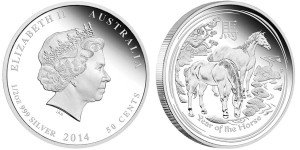 Both the gold and silver coins are issued by the Perth Mint as part of its popular Lunar Series II program. Coins of the program feature reverse designs showcasing one of the twelve creatures found in the Chinese zodiac.

For 2014, that creature is the horse.  Those born in 2014 are said to be under the influence of the horse with the personality traits of being sociable, optimistic and energetic.

The design found on the reverse of these silver proof coins was designed by Perth Mint artist Tom Vaughan. It shows two horses standing in a stylized Chinese landscape. The Chinese character for horse is seen above the design with "Year of the Horse" inscribed below.

Specifications of the proof quality Year of the Horse Silver Coins is offered below: 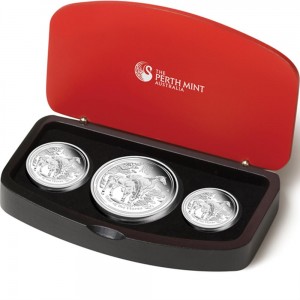 Individual coins are presented in a red and black Perth Mint display case. The three coin set appears in a similar case. All options come with a numbered certificate of authenticity and an illustrated shipper.

For more information, or to purchase one of the 2014 Year of the Horse Silver Proof Coins, please follow the affiliate link below: