Six different products related to the 2014 Native American $1 Coin make up the complete line-up of releases from the United States Mint this week.

As mentioned, all six contain circulation quality strikes of the new 2014 Native American coin. These coins continue the series of annually changing reverse designs which dates back to 2009.

The series showcases reverse images that celebrate the important contributions made by Indian tribes and individual Native Americans to the history and development of the United States.

For 2014, the chosen image (as described by the United States Mint): 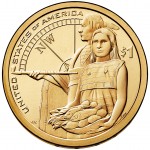 The new reverse design depicts a Native American man offering a pipe, while his wife offers provisions of fish, corn, roots, and gourds.  In the background is a stylized image of the face of Captain William Clark's compass, highlighting the northwest quadrant the Lewis and Clark Expedition explored.  Inscriptions are UNITED STATES OF AMERICA and $1.  The designer of the reverse is United States Mint Artistic Infusion Program Master Designer Chris Costello, and the sculptor is United States Mint Sculptor-Engraver Joseph Menna.

The obverse remains the same each year and depicts Glenna Goodacre's portrait of  Sacagawea. Inscriptions are LIBERTY and IN GOD WE TRUST.  Edge inscriptions include the year, mint mark, and E PLURIBUS UNUM.