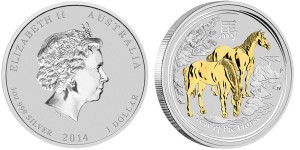 Now available from the Perth Mint of Australia are the 2014 Year of the Horse Gilded Silver Coins. Each of these are struck from one ounce of .999 fine silver with the reverse design highlighted in 24-karat gold gilding.

The coin features an issue limit of just 47,500 with a maximum mintage of 50,000. They are available now while the issue limit lasts directly from the Perth Mint.

However, unlike those related strikes, this coin offers 24-karat gilding selectively applied to the two horses. Reverse inscriptions include "Year of the Horse" and the Chinese character for 'horse.'

The obverse of each coin contains the Ian Rank-Broadley effigy of Queen Elizabeth II. Inscriptions surrounding the design include ELIZABETH II, AUSTRALIA, 2014, 1 DOLLAR and 1 OZ 999 SILVER. 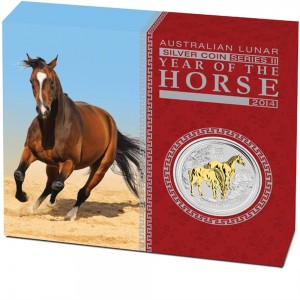 The Perth Mint places each coin in a black and red display case which ships inside an illustrated shipper with a certificate of authenticity. Also available are 2014 Year of the Horse Gilded Silver Coins in capsule only which is meant as an addition to the twelve-coin collection which many collectors add to each year as part of the Lunar Series II program. For example, last year's release was the 2013 Year of the Snake Gilded Silver Coin.

To order a 2014 Year of the Horse Gilded Silver Coin, or for more information, please follow the affiliate link below to be taken directly to the coin's product page on the Perth Mint's website: