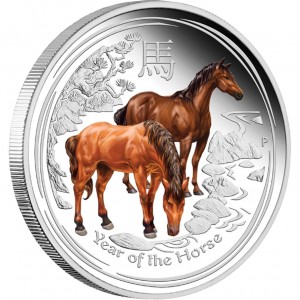 Available now for purchase from the Perth Mint of Australia are two new strikes issued as part of its extremely popular Australian Lunar Series II Program. Buyers may now obtain the 2014 Year of the Horse Silver Proof Colored Coins in both one ounce and one-half ounce versions.

These coins are composed of 99.9% pure silver and struck to proof quality. Maximum mintage for each release is just 10,000.

Shown on the reverse of the coins is a design depicting two horses set against a stylized Chinese landscape. It is the same basic reverse image as found on other 2014 Perth Mint Year of the Horse Silver Coins including the recently released Gilded Horse Coin, Proof Horse Coin and the Bullion Horse Coins.

However, for the reverse of these two strikes, the images of the horses are colored to lifelike hues. Inscriptions found on the reverse designs include Year of the Horse and the Chinese character for horse.

As with all legal tender Perth Mint releases, the obverse of each contains the Ian Rank-Broadley effigy of Queen Elizabeth II. Her portrait is surrounded by the inscriptions of ELIZABETH II, AUSTRALIA, 2014, the content (either 1 oz 999 SILVER or 1/2 oz 999 SILVER) and the face value (1 DOLLAR of 50 CENTS).

Specifications of the releases are as follows: 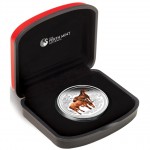 Each coin is presented in a black and red Perth Mint display case along with a numbered certificate of authenticity. An illustrated shipper is also included.

For additional information, or to purchase, please follow the affiliate link below: