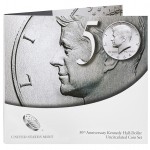 Next week, the United States Mint has scheduled the 50th Anniversary Kennedy Half-Dollar Uncirculated Coin Set for release. This set is likely to be extremely popular with collectors. 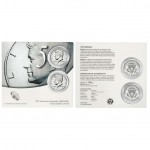 Both coins are encapsulated and attached to a display card which is housed in a presentation folder. The packaging allows for viewing of both the obverse and reverse of the coins.

Descriptions of the included strikes are printed on the packaging along with a Certificate of Authenticity, coin specifications, and the official Department of the Treasury seal.

As mentioned, the  50th Anniversary Kennedy Half-Dollar Uncirculated Coin Set goes on sale on July 24th for $9.95. A household order limit of five applies with no mintage or product limit in place.