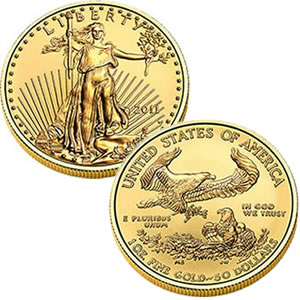 The 2011 American Eagle Gold Uncirculated Coin will be released by the United States Mint on May 5, 2011 beginning at noon Eastern Time (ET). This release will mark the first time the coins have been issued since last appearing in 2008.

The US Mint first released the American Eagle Gold Uncirculated Coin back in 2006 as a collector-grade version of the bullion Gold Eagle. Those bullion strikes debuted themselves in 1986 as a low-cost method for investors to add small amounts of gold to their portfolios.

Also premiering in 1986 were the Proof Gold Eagles, which used the same designs as the bullion strikes but were meant for collectors and as such, struck to proof quality. It took twenty more years, however, for the US Mint to decide that it would also produce a collector grade uncirculated strike of the Gold Eagle.

It did just that in 2006, and in fact, also produced fractional sizes of the uncirculated Eagle (1/2 ounce, 1/4 ounce and 1/10 ounce) which joined the standard ounce strike. All four sizes were produced for the next three years, but the Mint announced late in 2008 that it would no longer strike the fractionals in upcoming years as part of a thinning of the number of products it issued.

The next year, 2009, saw investors turning to the bullion Gold Eagles in record numbers during uncertain economic times. This forced the Mint to also cancel the ounce uncirculated Eagles that year to divert all available blank planchets to bullion production. At the time, it was required by law to strike the bullion Eagles to meet demand. Uncirculated Eagles also were not minted in 2010 as bullion sales continued at numbers not previously seen making their return this year the first time they will be available in three years.

The US Mint indicates that there is no pre-set mintage cap placed on these coins with the final mintage dictated by customer demand. Additionally, there is no household order limit for the Uncirculated Gold Eagles, however, their price point will keep many from purchasing the strikes.

Like other gold US Mint products, a pricing matrix will be used to determine the coin's weekly price. This matrix is based on the average London Spot for gold the previous week with the coin's debut price likely to be around $1,778.00 if gold continues to trade in the $1,500.00 and $1,549.99 an ounce window.

Once available, the Uncirculated Gold Eagles may be ordered directly from the US Mint via their website of http://www.usmint.gov/catalog or by calling 1-800-USA-MINT (872-6468).