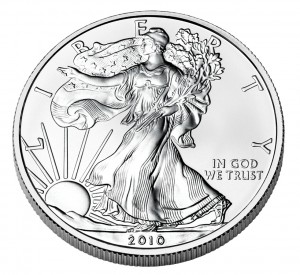 Bullion American Silver Eagles have proven to be extremely popular as of late with investors. So much so, in fact, that sales of the coins this month have already surpassed the previous monthly record for the strikes.

Considering the kinds of numbers needed to achieve that goal, this feat was quite amazing. Especially when you also consider that this month's numbers are current only as of the Mint's most recent sales figures released on January 19th leaving well over a week for the new record to grow to an even higher level.

According to the Mint, 4,588,000 of the American Silver Eagle's have been ordered by the Mint's network of authorized purchasers so far this month. In comparison, the previous monthly record was only recently established in November of 2010 when a then astonishing 4,260,000 coins were sold for the month. This means that the January 2011 numbers are almost at a third of a million more than the previous record, with several days to go.

These American Silver Eagles are struck by the US Mint as a low-cost option for investors to add small amounts of silver to their portfolios. The Mint started striking the coins in 1986 and they have been available annually ever since.

Investors may continue to seek the bullion Silver Eagles as the price of silver continues to slide. It started off the year at over $30 an ounce, but has recently dropped to the low $28 region.

For reference, the top ten months for American Silver Eagles are shown below: