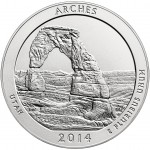 Arches National Park takes center stage next week at the United States Mint as rolls and bags of the Arches Quarter will be released for sale to the public on Monday, June 9, 2014. Then, on Thursday, June 12th, the U.S. Mint will release the Arches Five Ounce Silver Uncirculated Coin.

Each of these products contain a reverse design emblematic of Arches National Park located in the state of Utah. The image depicts Delicate Arch with the La Sal Mountains visible in the background. The reverse was designed by AIP artist Donna Weaver and executed by United States Mint Sculptor-Engraver Charles L. Vickers.

When issued, the products may be ordered directly from the United States Mint via its website of www.usmint.gov, or by calling 1-800-USA-MINT (872-6468).

Additional details on these releases is offered below: 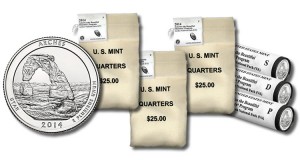 The Arches Quarter represents the twenty-third issue of the U.S. Mint's America the Beautiful Quarters® Program. 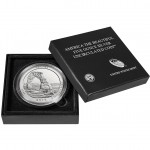 Each is composed of five ounces of .999 fine silver with a diameter of three inches. Mintage for the coin is limited to 30,000.