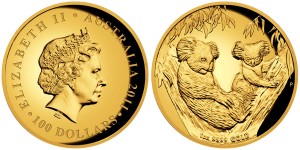 The Australian Koala 2011 Gold Proof Coin is now available from the Perth Mint of Australia after debuting earlier this month. The proof quality .9999 fine gold coins are produced in four different sizes including 2 oz, 1 oz, 1/10 oz and 1/25 oz.

This release of the Gold Proof Koala Coin marks the fourth annual issue of the series from the Perth which first appeared in 2008. The reverse of the strike is changed annually but always depicts Australia's indigenous koala in its natural habitat among the leaves and branches of the Eucalyptus Tree.

In the case of the 2011 Koala Gold Proof Coin, the reverse design shows an adult koala sitting in the fork of a tree while its young climbs one of the branches. This reverse design was originally completed by Elise Martinson and is joined by the inscriptions of 9999 GOLD as well as the size of the strike. Also shown on the reverse is the Perth Mint's historic 'P' mintmark.

Each coin in the series is considered legal tender of the country of Australia under the Australian Currency Act of 1965. Accordingly, the obverse includes Ian Rank-Broadley's effigy of Queen Elizabeth II of England. She is surrounded by the inscriptions of ELIZABETH II, AUSTRALIA, 2011 and the face value of the coin.

The strikes face value lists at AUS $200 for the 2 ounce strike, $100 for the ounce coin, $15 for the 1/10 ounce and $5 for the 1/25 ounce Koala. However, as is typical with precious metal coins, the face value is relatively minor compared to the intrinsic melt value of the strike.

The Perth launched the series in 2008, as previously mentioned, based on the popularity of the Silver Koala Coins that debuted the previous year. Both the gold and silver varieties include the same basic annually changing reverse designs and both have proven extremely popular with collectors from around the world.

Additional information on all of the Perth Mint's precious metal coins may be found by following the affiliate link below:

The Perth Mint of Australia