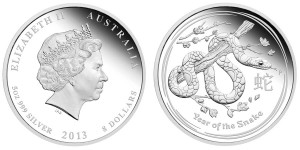 The image shows a single snake hanging from the branch of a tree. It was designed by Perth Mint artist Ing Ing Jong and also includes the Chinese character for snake along with the inscription of  "Year of the Snake." The Perth Mint's mintmark of 'P' can also be found on the reverse.

The 2013 Year of the Snake 5 oz Coin continues a series of five ounce strikes issued as part of the Lunar Series II program. Last year's release was the 2012 Year of the Dragon 5 Oz Coin.

These Snake Coins are struck as legal tender of Australia and feature a face value of eight dollars. As legal tender, the obverse of each coin contains the Ian Rank-Broadley effigy of Queen Elizabeth II. Obverse inscriptions include ELIZABETH II, AUSTRALIA, 5 oz 999 SILVER, 2013 and 8 DOLLARS. The initials of the artist "IRB" can also be found.

Each of these coins are composed of five ounces of 99.9% pure silver. They feature a diameter of 65.60 mm with a thickness of 5.8mm. Minimum gross weight of each piece is 155.50 grams.

The Perth Mint presents each coin along with a red and black presentation case shipped inside an illustrated shipper. A numbered certificate of authenticity is also included which indicates the extremely limited maximum mintage of the release of just 5,000.

As previously indicated, pricing is currently AUS $436.36 but is subject to change based on market conditions.

To order one of the 2013 Year of the Snake 5 Oz Silver Proof Coins, or for more information, please follow the affiliate link below.