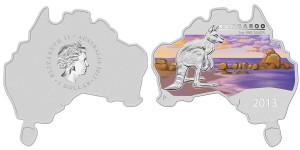 Offered as the third release in a proven sell-out series is the Australian Map-Shaped 2013 Kangaroo 1 oz Silver Coin. Shown on the reverse of the 99.9% pure silver coin is the image of a kangaroo set in the Australian outback.

This strike continues the extremely popular Australia map shaped program which debuted last year with two strikes that quickly went on to a sold-out status. Like those previous releases, the new Kangaroo Coin features the extremely limited mintage of just 6,000.

Coins of the series are struck in the shape of the Australian continent. Designs on the reverse of the coins are emblematic of scenes one may encounter in the country.

The reverse of the new release is described by the Perth Mint with:

"The coin’s coloured reverse depicts a kangaroo, against an idyllic sunset scene of Picnic Rocks, Tasmania. The inscription KANGAROO also appears in the design with The Perth Mint’s traditional ‘P’ mintmark and year-date."

This reverse design is the work of Perth Mint artist Ing Ing Jong.

Offered on the obverse is an Ian Rank-Broadley portrait of Queen Elizabeth II. Obverse inscriptions include ELIZABETH II, AUSTRALIA, 2013 and the legal tender face value of 1 DOLLAR.

Each Kangaroo Coin comes housed in a Perth Mint display case. Both are shipped inside an illustrated shipper along with a numbered certificate of authenticity. Specifications of the release include a diameter of 40.60 mm, a thickness of 4.50 mm and a minimum gross weight of 31.135 grams.

To purchase the Australian Map-Shaped 2013 Kangaroo Silver Coin, or for more information, please follow the Perth Mint affiliate link below to be taken to the facility's latest releases.

Additional Perth Mint Australian Map Shaped Coins can be found via the online auction site eBay as shown below: