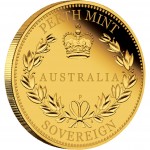 Now available from the Perth Mint of Australia is the Australian Sovereign 2014 Gold Proof Coin.

Mintage of Gold Proof Sovereign is extremely lmiited at only 1,500. They are available now for purchase directly from the Perth Mint for AUS $ 613.63.

"The Sydney Mint produced its first Type 1 sovereign, featuring a unique 'colonial' design, on 23 June (1855)," offers the Perth Mint in a press release. "There ensued an unbroken 76-year history of gold sovereign production in Australia."

This tradition of sovereign production continues today with collector grade issues such as this newest release.

Each 2014 proof sovereign features a modern tribute to those first colonial issues on their reverse. Shown is St Edward's crown, a laurel wreath and the inscription AUSTRALIA - all historic elements taken from Leonard Charles Wyon's original Type I reverse. Additional inscriptions include PERTH MINT, SOVEREIGN and the Perth's 'P' mintmark.

Queen Elizabeth II is shown on the obverse with a portrait by Ian Rank-Broadley. Inscriptions surrounding the effigy include ELIZABETH II, AUSTRALIA, 2014 and the legal tender face value of 25 DOLLARS. 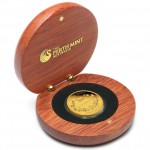 Each coin is housed in a wooden display case and ships with an illustrated shipper and a numbered Certificate of Authenticity.

As mentioned, mintage is limited to only 1,500 with current pricing of AUS $ 613.63. Pricing may change based on market conditions.

For more information, or to purchase, please follow the affiliate link below: