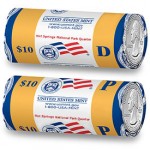 The United States Mint has announced that the first offering in the America the Beautiful Quarters Program will be available for purchase beginning next month.

The Hot Springs National Park Quarter will be sold in rolls and bags by the Mint beginning at Noon Eastern on April 19, 2010. That date also marks the first day the quarter dollars will be allowed into circulation through the Federal Reserve System and your local bank.

These strikes have the distinction of being the first of 56 quarter dollars that will be issued during the 11-year America the Beautiful program which honors sites of national interest throughout the nation.  Included in the selected sites are many national parks, forests, memorials, etc. with one site chosen from each state, the District of Columbia and the five United States territories. END_OF_DOCUMENT_TOKEN_TO_BE_REPLACED

The new programs over the next 11 years will feature rotating reverse designs -- 56 for each -- that honor national parks and other national sites in each state, the District of Columbia (DC) and each United States territory -- Puerto Rico, Guam, American Samoa, U.S. Virgin Islands and Northern Mariana Islands.

Two groups have already received candidate coin designs from the United States Mint. They include the Citizens Coinage Advisory Committee (CCAC), consisting of 11 members, and the United States Commission of Fine Arts (CFA), containing 7 members. The CCAC and the CFA have also provided their recommendations, which are included in the comments below. The Secretary of the Treasury is responsible for selecting the final quarter-dollar designs. END_OF_DOCUMENT_TOKEN_TO_BE_REPLACED 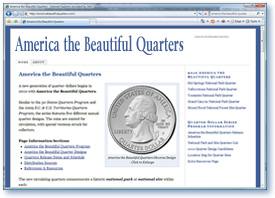 With interest already gaining momentum for the new series of quarter dollars scheduled to begin next year, CoinNews Media Group LLC is pleased to be able to offer a resource that all will find illuminating, the AmericaBeautifulQuarters.com Web site.

The quarter-dollars launch in 2010 and run for 11 years encompassing a total of 56 newly designed quarters. Five times a year a new coin will be issued to feature a different national park or national site -- one from each state, territory and the District of Columbia. END_OF_DOCUMENT_TOKEN_TO_BE_REPLACED