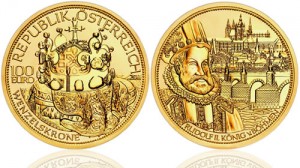 Featured on both the obverse and reverse of the coin are designs emblematic of the Crown of Saint Wenceslas, an important piece in the history of Bohemia. Each gold proof coin is struck from .986 fine gold to a diameter of 30 mm with a weight 16 grams. END_OF_DOCUMENT_TOKEN_TO_BE_REPLACED

The Austrian Mint has issued their release schedule for 2010 and it looks to be full of some very nice coins. The Mint also plans a couple of sets.

The first releases for the year celebrates the Winter Olympic Games that will be held in Vancouver, Canada. There are two coins scheduled with one of those highlighting the sport of snow boarding and the other ski-jump. Both coins are to be struck from 80% silver with a face value of 5 Euros. They will be available in both uncirculated and special uncirculated versions.

Next up is a continuation of the successful 'Celebrated Physicians of Austria' series. The 2010 coin will feature Karl Landsteiner who helped to identify the method of blood typing still in use today. His coin is made from 98.6% gold with a face value of 50 Euro. It will only be available in proof with a maximum of 50,000 struck.

END_OF_DOCUMENT_TOKEN_TO_BE_REPLACED

For those that are interested, it appears that the Perth Mint has once again made the Transformers Megatron Silver Proof Coin available for purchase online. Unfortunately, the Transformers Optimus Prime Coin must still be ordered over the phone.

Both released officially on July 14th, shortly after the blockbuster movie Transformers : Revenge of the Fallen came out in theaters. Apparently, demand must have been high for the coins, as a few days after release, the Perth pulled them from online ordering.

END_OF_DOCUMENT_TOKEN_TO_BE_REPLACED

Celebrating an occasion that would bring joy to millions around the world, yet brought back memories of death and hardship to many is the Perth Mint's Fall of the Berlin Wall 1oz Silver Proof Coin.

Fall of the
Berlin Wall Coin

November of 2009 will be the 20th anniversary of the official Fall of the Berlin Wall. A structure that was built a few decades earlier by the former USSR to prevent free passage from their section of East Germany to the free areas of West Berlin.

END_OF_DOCUMENT_TOKEN_TO_BE_REPLACED

The Austrian Mint today released the 2009 Electric Railway 20 Euro Silver Coin. This coin is the fifth of six coins in their "Austrian Railways" series.

Austria first started playing with the concept of electric train service in 1882. From that point on, they were pioneers in the field for decades.

END_OF_DOCUMENT_TOKEN_TO_BE_REPLACED

A coin that probably means more to the people of Austria than it does to the rest of the world has been released by the Austrian Mint . The Tyrolean Resistance Fighters coin celebrates the resistance movement that occurred in 1809 by the people of the Tyrolean valley.

These country folk took up arms to try and prevent the French forces (under Napoleon) and the Bavarian forces from taking over the region. They were loyal to the Emperor of Austria, but he had lost battles with the two superior forces of the French and the Bavarians. END_OF_DOCUMENT_TOKEN_TO_BE_REPLACED

Unknown to most, even in his own country of Austria, Theodor Billroth's contributions to the field of medicine has saved many lives, perhaps even your own. In celebration of his works the Austrian Mint has issued the Billroth Gold Coin as part of their "Celebrated Physicians of Austria" series.

Best remembered for his surgical knowledge, Billroth was also a fine musician and supporter of the Vienna musical society. His friendship with famed composer Johannes Brahms undoubtedly helped to foster some of Brahms' greatest works. END_OF_DOCUMENT_TOKEN_TO_BE_REPLACED

In a celebration aimed at 200 years since his death, the Austrian Mint has released the Joseph Haydn Silver coin.With a face value of 5 Euro, this coin will be available in circulated and uncirculated versions.

Joseph Haydn was (and still is today) known the world-over for his compositions. Rising up through adversity, he always sought to improve his knowledge of the music he so loved.

END_OF_DOCUMENT_TOKEN_TO_BE_REPLACED

The first coin in the new series entitled "Tales and Legends in Austria" features a creature not heard of by many, with the possible exception of Harry Potter fans. The Austrian Mint's Basilisk Coin was released earlier this year.

Citizens of Vienna are familiar enough with the legend of a basilisk that terrorized their city back in the year 1212. It is said that a terrible smell was coming from a well by a bakery. The fumes were so overpowering, that those who inhaled it died.

END_OF_DOCUMENT_TOKEN_TO_BE_REPLACED

If you are looking for an interesting coin to add to your collection, you may want to consider the Austrian Mint's Astronomy Coin. This unique coin, available from the Austrian Mint, is part of an international celebration of astronomy, meant to coincide with the 400 year anniversary of the making of Galileo's telescope. World Mint Coins has the specifications and images you need for this colorful piece.


What makes this coin truly unique is that it is composed of an outer ring of silver and an inner pill of Niobium. Niobium's unique properties allow it to be colored easily, and for the astronomy coin they chose yellow.