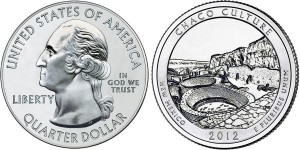 The United States Mint will be releasing the second 2012-dated strike of the America the Beautiful Quarters® Program next week. On April 2, 2012, bags and rolls of the 2012 Chaco Culture National Historical Park Quarter will be made available for ordering directly from the US Mint at Noon (Eastern).

These quarter dollars contain a design emblematic of Chaco Culture National Historical Park located in the state of New Mexico on their reverse. The design shows two elevated kivas that are part of the Chetro Ketl Complex as well as the north wall of Chetro Ketl and the north wall of the canyon. It was designed by AIP Master Designer Donna Weaver and sculpted by United States Mint Sculptor-Engraver Phebe Hemphill.

The Chaco Culture Quarters mark the twelfth issue of the US Mint's America the Beautiful Quarters which debuted in 2010. The series includes five new quarter dollars issued per year, each with a unique reverse design emblematic of a different site of national interest with one chosen from each state as well as the District of Columbia and the five US territories.

Shown on the obverse of each America the Beautiful Quarter is the same John Flanagan portrait of George Washington. This portrait has been used on quarters in one form or another since 1932.