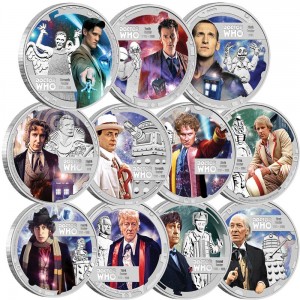 The interests of coin collectors and Sci-Fi lovers combine with a new release currently available from the Perth Mint of Australia. Sure to be popular, the Doctor Who 50th Anniversary 2013 1/2oz Silver Proof Eleven-Coin Set may now be purchased directly from the Perth Mint.

Included as part of the release are eleven 1/2 ounce 99.9% pure silver coins issued as legal tender of the South Pacific island nation of Niue. Each contains a different colored reverse depicting one of the eleven iconic Doctor Who incarnations presented throughout its fifty-year history on television.

The eleven coins were created as officially licensed products of the BBC Australia & New Zealand.

Mintage of the release is extremely limited. No more than 3,000 complete sets will be issued with a coin mintage cap of 4,000 in place.

Each set comes packaged in a special presentation case in the shape of the Doctor’s fob watch. The case opens to display the eleven coins and also includes a certificate of authenticity. A colored token is also included which includes a printed collage of the eleven Doctor Who characters.

"Doctor Who is famed for his ever-changing embodiments and we’re delighted to be reminding fans across Australia of his unique regenerations with this limited edition coin set," said Perth Mint Sales and Marketing Director, Ron Currie.

While supplies last, the Doctor Who 50th Anniversary 2013 1/2oz Silver Proof Eleven-Coin Set may be purchased directly from the Perth Mint. Current pricing is listed as AUS $635.45, but is subject to change.

To order, or for more information, please click on the affiliate link below to be taken directly to the set's product page on the Perth Mint website: