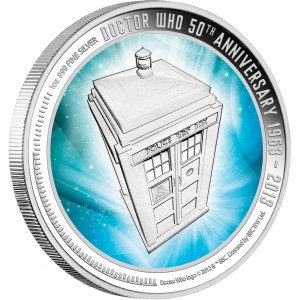 Commemorating one of the most popular science fiction shows in the world, the Perth Mint of Australia has released the 2013 Doctor Who 50th Anniversary 1oz Silver Proof Coin.

Each Doctor Who Coin is struck from one ounce of .999 fine silver to proof quality. The officially licensed product features an extremely limited mintage of just 10,000.

"Doctor Who is the world's longest running science fiction television series,' describes the Perth Mint of Australia on the Doctor Who Silver Proof Coin's product page. "Produced by the BBC, the program portrays the adventures of a time travelling alien known as the Doctor who explores the universe in his TARDIS, an extraordinary ship which is bigger on the inside than the outside and has the appearance of a 1960s British Police Box.  Along with his succession of companions, the Doctor faces a variety of adversaries as he works to save civilisations, help people, and right wrongs across the cosmos."

A colored reverse design is found on the reverse of the coin. It shows the TARDIS in the center with a blue background representing multidimensional travel. Reverse inscriptions include DOCTOR WHO 50TH ANNIVERSARY 1963 – 2013, 1 OZ 999 FINE SILVER, DOCTOR WHO LOGO ©2012 & ™ BBC, LICENSED BY BBC WW LTD.

These coins are struck by the Perth Mint  and issued by New Zealand Mint as legal tender of the South Pacific island nation of Niue. Ian Rank-Broadley's effigy of Queen Elizabeth II is shown on the obverse along with the inscriptions of ELIZABETH II, 2013, NIUE and the face value of TWO DOLLARS. 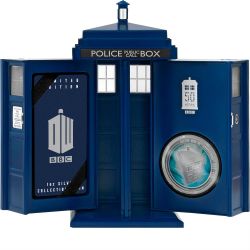 Each coin ships in a a special presentation case in the shape of the TARDIS within a BBC branded shipper.  As an added touch of detail, the doors of the TARDIS open to the  ‘vworp vworp’ sound taken from the show. When opened, the coin and and a numbered Certificate of Authenticity are visible.

Current pricing of the strike is listed as AUS $104.54, but is subject to change.

For additional information, or to order a 2013 Doctor Who 50th Anniversary 1 oz Silver Proof Coin, please use the affiliate link below: