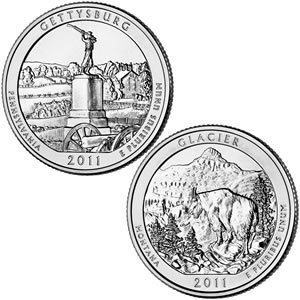 In just two days, the US Mint's network of authorized purchasers (APs) will be able to place their initial orders for the first two releases of the 2011 America the Beautiful Silver Bullion Coins™.

Beginning on Monday, April 25, 2010, the United States Mint will begin accepting orders from the APs for the 2011 Gettysburg National Military Park Silver Bullion Coin and the 2011 Glacier National Park Silver Bullion Coin. This will mark the availability of the first two 2011-dated strikes in the series which debuted last year in December when the US Mint released the first five coins in the program.

The Gettysburg Silver Bullion Coin honors Gettysburg National Military Park of Pennsylvania with a reverse design emblematic of the location. This design is also featured on the related Gettysburg America the Beautiful Quarter and shows the Pennsylvania 72nd Infantry Monument which is located at the military park. The design was created by United States Mint Artistic Infusion Program (AIP) Master Designer Joel Iskowitz and sculpted by United States Mint Sculptor-Engraver Phebe Hemphill.

Shown on the reverse of the Glacier Silver Bullion Coin is a design depicting a mountain goat traversing the rugged terrain of Glacier National Park found in the state of Montana. Off in the distance, iconic Mount Reynolds is shown. This design was completed by AIP Associate Designer Barbara Fox and sculpted by United States Mint Sculptor-Engraver Charles Vickers.

These two coins are the sixth and seventh in the America the Beautiful Silver Bullion series of which the first five strikes were initially offered last year on December 10, 2010. That release was actually four days after the Mint had originally planned. Owing to concerns over potential price gouging, the Mint delayed the release to allow it time to create and implement additional terms and conditions on the coins not seen for other bullion products of the Mint.

Those terms were seen as essential because the Mint was only able to produce 33,000 of each of the five 2010-dated strikes - an extremely small mintage for any US Mint product. The US Mint has indicated, however, that these restrictions will no longer be required with this year's releases as an initial quantity of 126,500 of each of the first two 2011-dated coins has been produced. More coins may be produced, as well, if demand warrants it.

Once the authorized purchasers have placed their orders, the Mint will go about the process of fulfilling them meaning the strikes should slowly work their way into the market-place sometime next month and will likely be available from local coin dealers who typically deal in other bullion products from the Mint like the American Eagles.